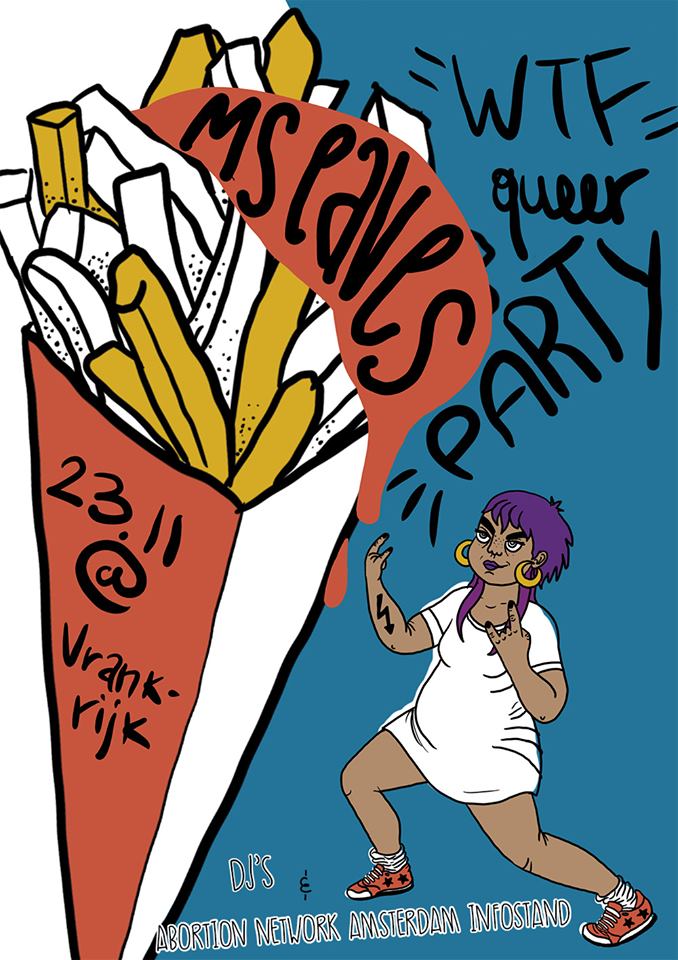 
On the 23 of November Miss Eaves is going to blow the roof off of Vrankrijk with her witty rhymes and hard beats. After the show we will have a dance party with local DJ’s. Hosted by WTF Queer Night

We are a group of volunteers who came together to create a network of support for women and pregnant people who don’t have access to safe abortion. This could be the case for a number of reasons:

Compared to other European countries where abortion is also legal, the Netherlands is of specific interest because of the later term until which an abortion is allowed. Most countries only provide abortions during the first trimester, which is until 12 weeks.

There are numerous reasons why someone could need a second trimester abortion. Pregnancies are not always discovered within the first trimester, for instance. In many countries first trimester abortions are only legal on paper, in practice they are not always accessible to everyone. With the changing political climate there has been an increasing demand for support related to women and pregnant people having to come to The Netherlands for an abortion.

We work closely with other abortion support networks like Abortion Dream Team in Poland, Ciocia Basia in Berlin and Abortion Support Network in London. Our work mainly concerns Polish women who are in need of a second trimester abortion but we receive emails from people all over the world looking for help with an unintended pregnancy.

Practically our work involves helping to set up appointments, choosing the appropriate clinic in the Netherlands, making sure people have all the documents they need, helping with transportation, providing people traveling to The Netherlands with housing, translation aid and accompanying people to their appointment if requested.